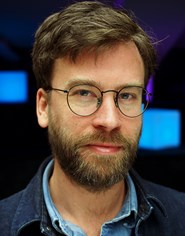 Fredrik Norén works as a senior research assistant at Humlab with a special focus on digital text analysis. Norén completed his PhD in media and communication at Umeå University in 2019, with a thesis on the formation of governmental information in Sweden 1965–1975. He has a background in film studies (major) and political science (major) from Lund University. Norén has also been a visiting student researcher at Stanford University (2016) and Columbia University (2017).

Noréns research centers on the intersections between digital humanities, media history and political culture. In particular, his areas of interest are digital text methods and governmental agencies’ media strategies and use of information during the Post-War era.

In addition to his role in INIDUN, Norén works in the research project Welfare State Analytics (WeStAc), funded by the Swedish Research Council (2019–2023), which will text mine and model Swedish politics, media and culture between 1945 and 1989. The project will digitise literature, curate already digitised collections, and perform research via probabilistic methods and text mining models. Given WeStAc’s combination of general and particular research questions, the project will give new perspectives on well-researched topics and explore novel ways of analysing historical Big Data.

You can have many headings